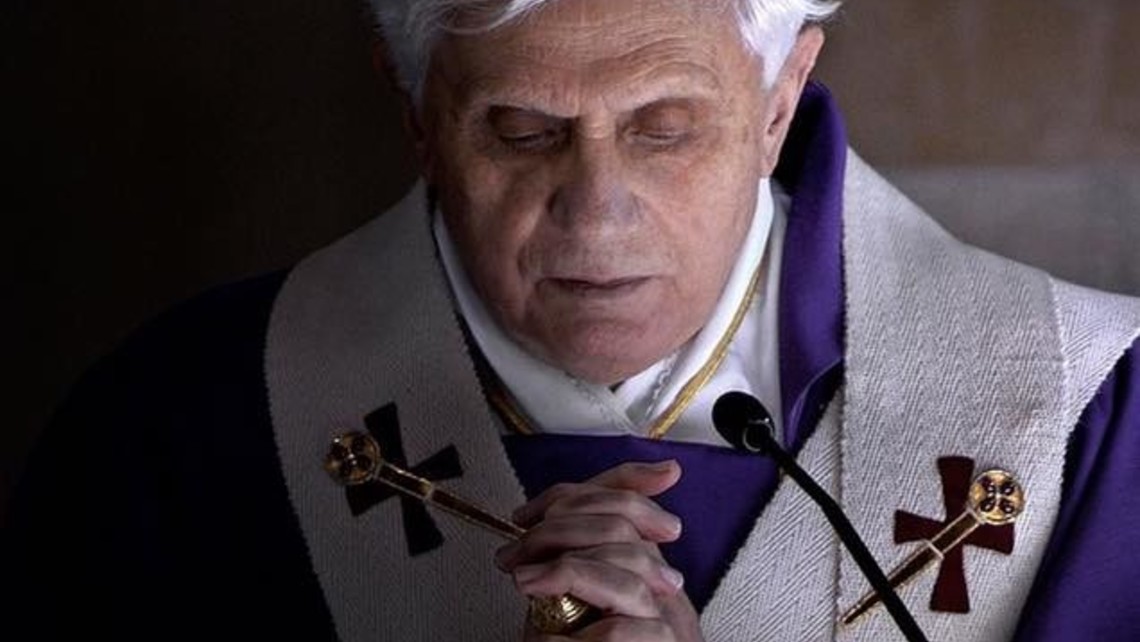 How to be taken over by the love of Jesus Christ
January 4, 2023

As we continue to celebrate the life of Cardinal Joseph Ratzinger-Pope Benedict XVI as expressed through the gift of the Papal funeral rite that all of us witnessed this past week, all published commentaries for, against, or somewhat bewildered by his actions during his Pontificate, there is a unifying theme that I argue stands above all; he never wavered in teaching us how to seek an encounter with Jesus Christ.

From his initial-seminal work, Introduction to Christianity, Cardinal Ratzinger emphasized the urgency to learn about Jesus Christ through Sacred Scripture and Tradition. For Ratzinger, faith rooted in love was a basic presupposition of the missionary task to teach and seek an encounter with Jesus Christ.[1] This premise echoes the emphasis of the Catechism of the Catholic Church, which citing the Roman Catechism, beautifully reminds us that all our teaching is directed to the love that never ends.[2]

We encounter Christ in His Word

Benedict XVI stressed that the way to encounter our Lord is through an understanding of the whole history of salvation which progressively demonstrates a profound bond between the Word of God and the faith which arises from an encounter with Christ. Faith thus takes shape as an encounter with a person we entrust our whole life. Christ Jesus remains present today in history, in his body which is the Church; for this reason, our act of faith is at once both personal and ecclesial.[3] The novelty of the Christian message does not consist in an idea but in a fact: God has revealed himself.[4]

In his role as Prefect for the Congregation for the Doctrine of the Faith, Cardinal Ratzinger describes the structure of the Catechism of the Catholic Church as the way to express the faith, not as a theory but an event, an encounter with the living God who is our Father, who in his Son Jesus Christ assumed human nature, who unites us in the Holy Spirit and who, in all this, remains the one and only God.[5] Ratzinger explains the importance of the Catechism of the Catholic Church by way of St. Paul, who describes the handing over of the faith in his Letter to the Romans,[6] where the form of doctrine is an essential component of the faith. We do not think up faith on our own. It does not come from us as an idea of ours but to us as a word from the outside. It is, as it were, a word about the Word; we are handed over into this Word that reveals new paths to our reason and gives form to our life.[7]

A personal encounter with Jesus Christ

Ratzinger had a particular love for the Gospel of St. John in describing the essential mystery of Jesus’ death and resurrection. Ratzinger focuses on the words of Christ in the seventh chapter of St. John as the formative building blocks for seeking a loving encounter with Jesus Christ, where he emphasizes that my teaching is not mine but his who sent me.[8] The significance of this scripture passage is that it calls us to seek accompaniment with God and that our ability to teach the faith effectively relies on a genuine loving encounter with the Son of God, the Word made flesh.

Faith requires instruction and an ethical approach, not a vague sense of transcendent and inexpressible reality. Granted, it leaves its mark first on the human heart, but from the depths of the heart, it leaves its mark also on intellect and will. Faith requires a constant training of the whole personality and a readiness to keep on learning for the rest of one's life, to remain a pupil in the school of Christ. Teaching is a Christian calling, a work of mercy, for the lack of truth, the lack of knowledge, is a direr form of poverty than any purely material form. You cannot teach if you do not give instruction about the nature of man if you do not transmit a comprehensive history of human culture. On the other hand, every instruction must also serve as an affirmation of the art of being human and an assurance that the nucleus of this art is faith.[9]

An encounter with the Good Shepherd

In his work Jesus of Nazareth, Pope Benedict XVI describes the Good Shepherd in chapter ten of St. John’s Gospel in relation to Psalm 23 and the Divine Shepherd discourse as the most beautiful expression of trustful devotion to our Lord.[10] In these discourses, we are given the image of the Shepherd who goes after his sheep. He reminds us that Jesus came to give life and not take it away.[11] Through the Good Shepherd discourse, Pope Benedict XVI reminds us that our encounter with Jesus Christ must revolve around the nature of how we worship Him. In Christian worship, we encounter our Lord’s absolute love as it could only be poured out by the one in whom God’s own love had become human love; and it consists in the new form of representation included in this love, namely that he stood for us and we let ourselves be taken over by him.[12]

Thank you, Pope Benedict, for showing us how to let ourselves be taken over by the love of Jesus Christ.

Is he ready to receive Jesus?

The mother came into my office a bit disheveled; her eyes immediately fixated on me, hoping for a positive answer. She got to the... END_OF_DOCUMENT_TOKEN_TO_BE_REPLACED

We are called to be addicted to God

As the young man gazed around the classroom, you could sense his fear and confusion, questioning why he was in this class. Any teacher... END_OF_DOCUMENT_TOKEN_TO_BE_REPLACED

In one of his most important works, A Grammar of Assent , St. John Henry Newman describes the development of thought in one true... END_OF_DOCUMENT_TOKEN_TO_BE_REPLACED