Why the Catechism of the Catholic Church Matters 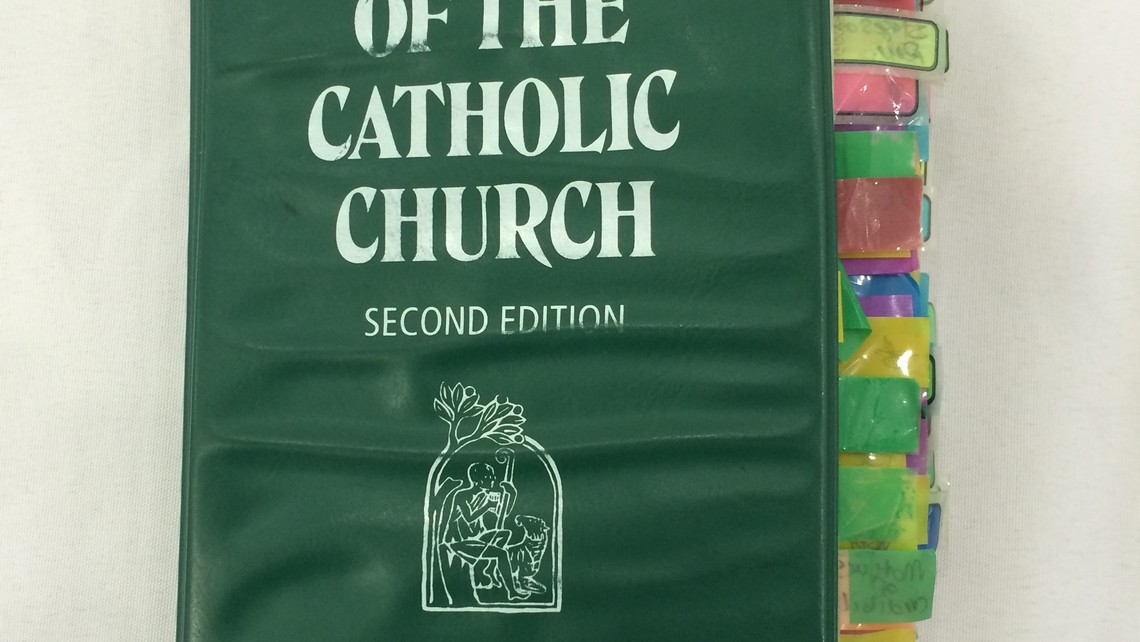 G.K. Chesterton once said that to be inside Christendom one has to be near enough to love it, (pg. 10-11 Everlasting Man). The same could be said about anything that truly peaks our interest. This method of inquiry can serve us well when we attempt to find the truth in things. In many respects, this is what the Catechism of the Catholic Church has brought to the faithful, the opportunity to be near Christ in a most loving way.

St. Paul reminds us that “. . . all Scripture is inspired by God and profitable for teaching, for reproof and correction . . .” (2 Tim 3:16-17). This explanation of the Deposit of Faith opens the door toward the foundational content of the Catechism as the vehicle which serves in expressing and promoting the teachings of Jesus Christ guarded and delivered by the Church (Mt 28: 17-20). When someone takes the time to read the catechism two things jump out:  Jesus Christ is its source and conversion is the end result.

The Catechism serves as a living breathing synthesis of the Catholic faith as taught by Christ and handed down to His Apostles and disciples. From the development of the Schemaor scheme of Jesus’ teaching i.e. the Creed found in (Deuteronomy 6:4-6, 9) the schema refers to what we are to believe. This serves as the seed for the Apostolic Didache, the Roman Catechism, and what we have now in the Catechism of the Catholic Church.

Many years ago, a friend of mine had been for some time been contemplating Catholicism, but was still trying to grasp the complexities of Catholic thought and how the Church developed its doctrine. He had dabbled into the Church Fathers, read everything on St. Augustine and began attending Mass incognito. However, he had not yet begun to read the Catechism of the Catholic Church. The more he researched Catholicism the stronger his draw to the inner workings of the Church became especially doctrine. Throughout his time of study and discernment he was still perplexed on how everything connects in the Catholic Church. What he was looking for was that symphony of faith where all the doctrinal winds he had been a part of in his life would make sense.

Once he began to study the Catechism at my insistence he discovered a unique and readable exposition of the Catholic faith. For the first time, he saw the symphony of faith and the development of doctrine encompassed in the Catechism. He called the Catechism “a true love story” and saw the connection between Christ and the Church, between the Word of God and the deposit of faith. My friend now viewed the Catechism in a whole new light one that revealed the very language of faith he had searched for some time. A true spiritual love affair developed between my friend and the Catechism.

The whole concern of doctrine and its teaching must be directed to the love that never ends. Whether something is proposed for belief, for hope or for action, the love of our Lord must always be made accessible, so that anyone can see that all the works of perfect Christian virtue spring from love and have no other objective than to arrive at love. (CCC 25)

Why the Catechism Matters

In Christ Jesus, the whole of God’s truth has been made manifest. “Full of grace and truth,” he came as the “light of the world,” he is the Truth. . .  The disciple of Jesus continues in his word so as to know “the truth that will make you free” and that sanctifies. To follow Jesus is to live in the “Spirit of truth,” whom the Father sends in his name and who leads “into all the truth.” To his disciples Jesus teaches the unconditional love of truth: Let what you say be simply Yes or No. (CCC 2465)

The Catechism owes its viability to Christ Himself. Why? Because it serves and represents Christ’s creedal message that is both kerygmatic and catechetical. The catechism constitutes a fundamental service by encouraging the proclamation of the Gospel and the teaching of the faith, which both draw their message from Tradition and Sacred Scripture entrusted to the Church, so as to achieve this function with complete authenticity (General Directory for Catechesis, 125).

. . . at every time and in every place, God draws close to man. He calls men to seek him, to know him, to love him with all his strength. He calls together all men, scattered and divided by sin, into the unity of his family, the Church. To accomplish this, when the fullness of time had come, God sent his Son as Redeemer and Savior. In his Son and through him, he invites men to become, in the Holy Spirit, his adopted children and thus heirs of his blessed life. (CCC 1)

There is a scene in book four of Screwtape Letters where Screwtape is quite insistent that Wormwood keep the patient from developing a prayer... END_OF_DOCUMENT_TOKEN_TO_BE_REPLACED

The young man was insistent that he understood what was required of marriage. As he and his fiancé half-heatedly prepared themselves for the pre-cana... END_OF_DOCUMENT_TOKEN_TO_BE_REPLACED

The sincerity of his eyes offered a striking glimpse into the pain he had endured as a child. Left with spiritual scars and wounds... END_OF_DOCUMENT_TOKEN_TO_BE_REPLACED