There is a risk in accepting Jesus Christ in your life, are you willing to take it? 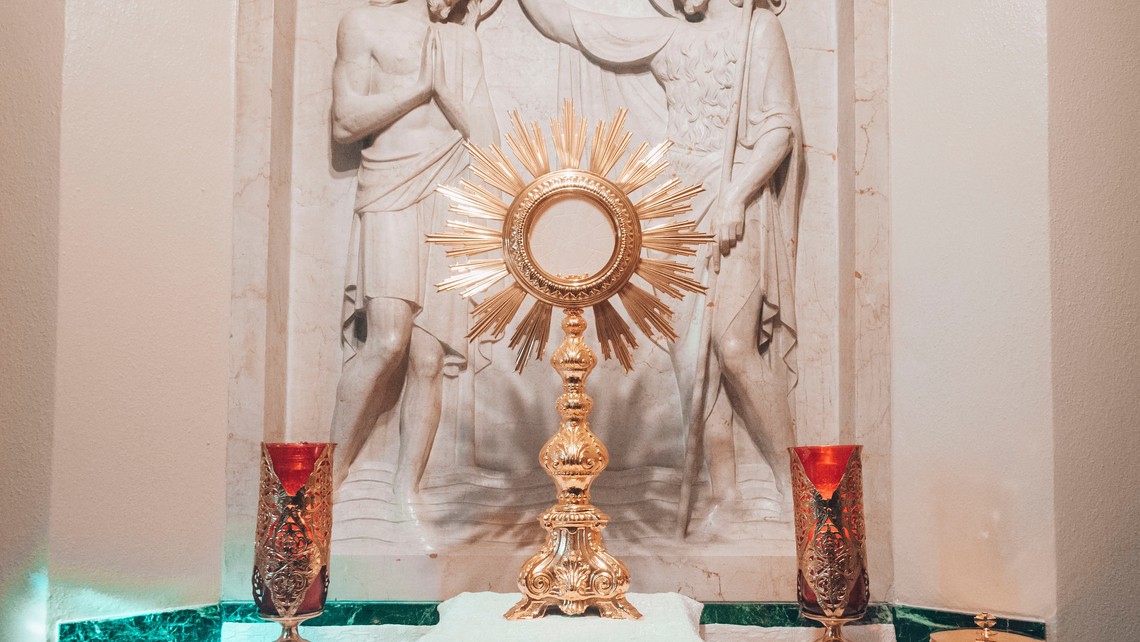 Entering a Catholic Church for the very first time, Michael did not know what to expect. There was a visible fear across his face because he had been searching for direction and meaning in his life having dabbled in Hinduism, Buddhism, Taoism, Atheism, and ultimately a non-denominational community of believers. He was hoping to find acceptance and refuge from a world he had come to realize did not offer the answers of hope and love he was searching for.

In every religion he encountered, the emphasis was a turning inward toward the self, a self-actualization and realization that he somehow will find his own solitude and peace by simply addressing his own needs. Though the non-denominational community he had associated with did offer him an opportunity to develop an initial faith in God and ultimately Jesus Christ, in his mind there was still something missing because the entire premise as he told me was about receiving something from Jesus instead of offering something to him. For Michael, he viewed this process as addressing oneself with Christ without any risk. He thought; “there has to be some risk when you make a commitment to something.”

The risk of faith

The anatomy of making a personal decision of faith, the free exercise to believe in something can be fraught with fear, anxiety, frustration, confusion and hopefully, peace. This was part of Michael’s journey when he began to contemplate Jesus Christ as both man and God which fascinated him because of what God decided to do in bringing His son into the world to restore our relationship with Him.

As Michael began to genuinely discern the possible reality of making an act of faith to Jesus Christ, his first reaction was, “no, I first need to understand the risks of committing myself to such a change in my life.” As we continued to discuss his journey during our first meeting, I asked him what he feared the most about starting an active relationship with Jesus Christ, without hesitation he replied: “what I would be required to give up or add in my life.”

When the holy martyr Blessed Miguel Pro freely chose to celebrate the sacraments during the persecution of the Catholic Church in Mexico between 1926-1929, he knew quite well that if he was caught it was an automatic death sentence. He understood the danger of his priestly ministry during this time but he chose to risk his life for the sake of Christ and His Church. The book of Hebrews provides us with a clear insight on the risk and struggles involved in accepting Jesus Christ in your life:

Therefore, since we are surrounded by so great a cloud of witnesses, let us also lay aside every weight, and sin which clings so closely, and let us run with perseverance the race that is set before us, looking to Jesus the pioneer and perfecter of our faith, who for the joy that was set before him endured the cross, despising the shame, and is seated at the right hand of the throne of God. Consider him who endured from sinners such hostility against himself, so that you may not grow weary or fainthearted. In your struggle against sin, you have not yet resisted to the point of shedding your blood. And have you forgotten the exhortation which addresses you as sons? — “My son, do not regard lightly the discipline of the Lord, nor lose courage when you are punished by him. For the Lord disciplines him whom he loves, and chastises every son whom he receives.[1]

In this passage we encounter an interesting point the author makes that one’s profession of faith to Jesus Christ is not complete until you have resisted sin to the point of shedding blood a reference to Christ shedding blood at Gethsemane as he freely chose to offer his life for the sins of humanity. We are presented with an example of how Jesus persevered in faith to the will of God knowing that he would be crucified for daring to call himself God.

The risk of faith in Jesus Christ

The issue of faith, or more appropriately the act of faith within a Christological context means the progression of a person’s willingness to accept Jesus Christ as the greatest example of truth above all else. This was a very intimidating proposition for Michael because it meant the recognition and acknowledgement of his own sins, and the willingness to renounce these sins and embrace the redemptive suffering of Christ in his daily living.

Several months later as Michael continued to weigh the significance of his decision to accept Jesus Christ in his life, he turned to me with tears in his eyes and said;” I can no longer live a life apart from Him, my desire is to serve Him, Jesus is my Lord and Savior.” Michael’s profession of faith reminded me of the passage from St. Paul to the Romans where he says:

But thanks be to God, that you who were once slaves of sin have become obedient from the heart to the standard of teaching to which you were committed, and, having been set free from sin, have become slaves of righteousness. I am speaking in human terms, because of your natural limitations. For just as you once yielded your members to impurity and to greater and greater iniquity, so now yield your members to righteousness for sanctification.[2]

Michael’s greatest risk was embracing a life he had never lived before. His world view has now been replaced with a Catholic world view centered on Jesus Christ in word and deed. S with Michael’s example, our own lives are predicated on taking risks and gauging whether these risks are worth our time and effort. With respect to the opportunity to accept a life with Jesus Christ and the hope of spending an eternity with Him in heaven, I believe the risk is well worth taking, it was for Michael.

Blessed Miguel Pro, pray for us!

There is an interesting yet profound requirement the people of Israel are told to follow written in the book of Deuteronomy. The last book... END_OF_DOCUMENT_TOKEN_TO_BE_REPLACED

The evangelist St. John the Baptist introduces us to the drama that affects every human being when he reminds both Jews and Gentiles to... END_OF_DOCUMENT_TOKEN_TO_BE_REPLACED

A consistent question I have been asked over the course of my ministry is how important is the use of one’s personal experience in... END_OF_DOCUMENT_TOKEN_TO_BE_REPLACED