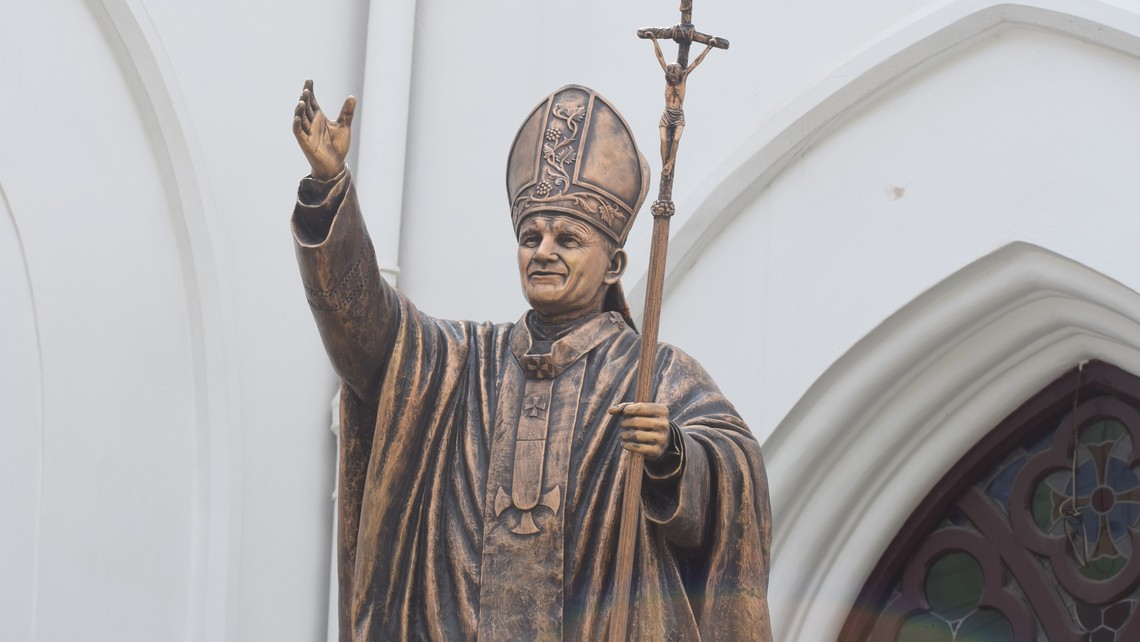 When Jesus Christ, the Son of God resurrects from his scourged, crucified body and reveals Himself in a glorified resurrected state, we encounter a progression of His life from Jesus as son of God to Jesus Christ the King. The significance of Jesus’ resurrected identity is that sin and death have been destroyed. Now, the Messiah walks amongst his followers lovingly revealing Himself through the breaking of the bread to his Apostles and encouraging them to speak and teach in His name in anticipation of their hopeful final journey which is Heaven.

The significance of the resurrection event which did occur as witnessed by Jesus’ Mother Mary, Mary Magdalene and afterward by the Apostles, is the renewal and healing of the hearts and minds of the Messiah’s followers to imitate, proclaim, and teach in the name of Jesus Christ and shun all worldly and human desires.[1] Christ the King introduces a pastoral path on how to spiritually nurture someone who has just been fed the Word of God and begins to exhibit an openness and trust to Christ’s message of love and mercy.

Jesus’ proclamation of mercy is an actual invitation to the table of our Lord’s Kingdom. He reminds us that he did not come to call the righteous but sinners[2] and invites us to that conversion without which one cannot enter the kingdom, but shows them in word and deed his Father’s boundless mercy for them and the vast joy in heave when over one sinner who repents.[3]

The invitation to conversion can best be described through the parable of the Prodigal Son. This particular parable introduces us to an anthropological development of sin and the Christian anthropological response of mercy, healing, and conversion. As expressed by St. Luke in his Gospel, the son who made the free choice to squander his inheritance and is left destitute both spiritually and physically as a result of his choices begins to take a toll on him. He is left with the humiliation of eating scraps left for the swine. Upon the realization or self-awareness that his sins have left him in this pitiable state, The Prodigal Son decides to return to his father and beg for forgiveness and mercy. As the son returns to the very home he abandoned, his father sees him and immediately rejoices that he has come home and welcomes him with open arms shouting that he has been found.[4]

The parable of the Prodigal Son acutely reveals a message of mercy, forgiveness, and acceptance that Jesus is trying to instill to those who murmured against him eating with tax collectors and sinners. The message Jesus proclaims is that God’s mercy is infinite and no one is beyond redemption and forgiveness. The Catechism of the Catholic Church reminds us:

God created us without us: but he did not will to save us without us. To receive his mercy, we must admit our faults.[5]

The sacrament of penance-an act of mercy

Through the trilogy of examples Jesus provides to the Pharisees in the parable of the lost sheep, the lost coin, and the Prodigal Son Jesus reminds his listeners, followers, and detractors that the sounds of Heaven will be heard rejoicing over one sinner who repents.[6] The act of mercy expressed through these parables also introduces us to the process of conversion and repentance. The interaction between the father and his Prodigal son reveals a son admission of his faults and freely decides to make a firm purpose of amendment to seek his father’s loving embrace and a father’s loving welcome that his son has returned.

The sacrament of penance represents God’s love for his children to be united with Him even if it meant the sacrifice of his only-begotten son. The Catechism of the Catholic Church explains the doctrine of Penance and Reconciliation in five ways:

The reason Jesus introduced the sacrament of penance was to reveal God’s infinite mercy to His children and to extol to humanity that no one is immune from receiving God’s love, healing, and forgiveness.

St. Faustina and the message of Divine Mercy

We rightfully attribute a proper understanding of suffering, mercy, and redemption to the life, death, resurrection, and ascension of Jesus Christ. His Paschal Mystery foreshadows the stages of man’s relationship with God the Father and whether our desire is Heaven or Hell. It is with this backdrop that Christ the King chose a humble servant in Helena (Faustina) Kowalska to spread the message of Jesus Christ’s unfathomable Divine Mercy to the entire world.

In 1931, St. Faustina Kowalska received a message from our Lord through an image of Him clothed in radiant white with his right hand raise and his left hand touching his seamless garment with two rays emanating from his chest, one red the other white. When pressed by her spiritual director to ask Christ what the image meant St. Faustina obliged with the following message:

The two rays denote Blood and Water. The pale ray stands for the Water which makes souls righteous. The red ray stands for the Blood which is the life of souls. These two rays issued forth from the depths of My tender mercy when My agonized Heart was opened by a lance on the Cross. Happy is the one who will dwell in their shelter, for the just hand of God shall not lay hold of him.[8] By means of this image I shall grant many graces to souls. It is to be a reminder of the demands of My mercy, because even the strongest faith is of no avail without works.[9]

The message of Divine Mercy encourages us to ask for God’s mercy and seek His loving forgiveness especially through the sacrament of penance and to offer our sufferings for those in need, be merciful to others which also means to love your neighbor as yourself, and finally to trust in Jesus and his message of mercy and redemption.

As we prepare to be united with St. Faustina in the celebration of Divine Mercy Sunday instituted by St. John Paul II on the second Sunday of Easter May 5, 2000 let us not forget the healing words of the Chaplet of Divine Mercy that intimately remind us of the need to place all of our trust in Jesus Christ and that no one is beyond His infinite mercy:

Eternal Father, I offer you the body and blood, soul and divinity of your dearly beloved son Jesus Christ, in atonement for our sins and for the sins of the whole world:

For the sake of His sorrowful passion, have mercy on us and on the whole world.

St. Faustina, Pray for us!

The sincerity of his eyes offered a striking glimpse into the pain he had endured as a child. Left with spiritual scars and wounds... END_OF_DOCUMENT_TOKEN_TO_BE_REPLACED

Every year we encounter an unfortunate sacramental rite of passage. I dare say unfortunate because this is how many parents view or worse understand... END_OF_DOCUMENT_TOKEN_TO_BE_REPLACED

There is an interesting paragraph located at the very beginning of the Catechism of the Catholic Church , that describes its origin, purpose, and... END_OF_DOCUMENT_TOKEN_TO_BE_REPLACED