How would St. John Bosco speak to his students? 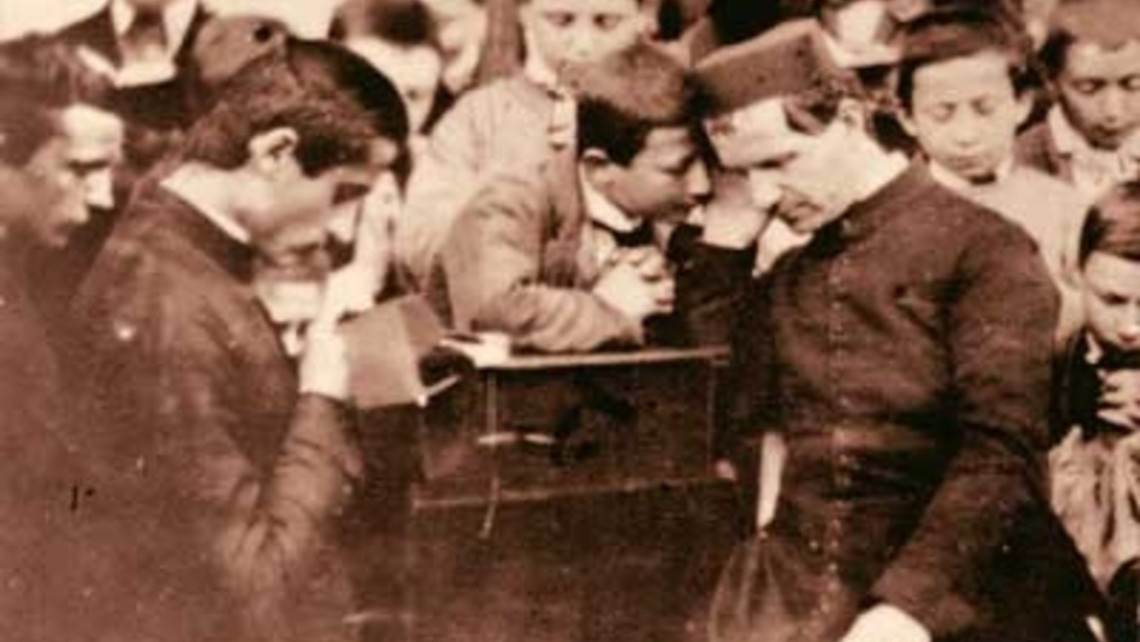 The great Catholic educator St. John Bosco was known to suffocate his students with love. This meant that he identified and affirmed his students as children created in the image and likeness of God. Part of this unique approach was instilling in his students a sense of moral discipline, the use of reason and the study of religion. St. John Bosco was not passive in his approach with “his boys” in many respects he was a strict disciplinarian who had little tolerance for disobedience, and he was not shy of expressing his displeasure with their behavior when warranted.

The Method of St. John Bosco

One of St. John’s Bosco’s education tenets was the art of dialogue. He would consistently establish relationships with his students by way of dialogue e.g. learning their ways, attitudes, and inclinations. His method/approach could be described as a “ministry of presence” where dialogue serves as a vehicle to establish an active relationship with a young man which foster and introduce further spiritual and doctrinal formation.

As a result, St. John Bosco sought to create a family atmosphere, one where the student would know and understand the virtues of discipline, love, kindness, reason and most importantly of all religion-the teachings of Christ. As a result of this approach the “family spirit” reigned where his oratory was a community of faith in Christ and His Church. A central premise of his approach was the establishment of a family of faith through what he would call the preventive method. This specific methodology involved the acknowledgment of morality, frequent confession and reception of Holy Communion and the practice of the virtue of love.

The Language of St. John Bosco

Whether you identify yourself as a religious educator, catechist, professor, theologian or speaker, the way you convey and articulate the content of your instruction will determine whether the student will listen and embrace or ignore and discard what you propose. What makes St. John Bosco’s Salesian Methodology based on St. Francis De Sales charism of teaching was his constant articulation of the story of Jesus Christ and His salvific actions encompassed in the Paschal Mystery. The proclamation of the Gospel was an essential instructional component St. John Bosco would implement when teaching the boys of the oratory. The aim of this approach was the salvation of the young boy’s soul. Don Bosco would not shy away in revealing his intention to the entire oratory.

Don Bosco’s language was intended to engage the soul of the child by acquiring a better understanding of the child’s heart. We see this affirmed and taught by St. Paul’s first letter to the Corinthians-1 Cor 13:14-17. The Salesian approach to education involved the idea that one can attain Christian perfection through spiritual and corporal works of mercy. The Catechism of the Catholic Church (170) provides us with an understanding of the language of faith as follows:

We do not believe in formulas, but in those realities they express, which faith allows us to touch. “The believer’s act [of faith] does not terminate in the propositions, but in the realities which they express.” All the same, we do approach these realities with the help of formulations of the faith which permit us to express the faith and to hand it on, to celebrate it in community, to assimilate and live on it more and more.

St. John Bosco was very direct in his intention to save the soul of every young man he encountered. Professing the reality of Jesus Christ and demonstrating Christ’s love by way of His crucifixion was very important to Don Bosco because it centered around his Salesian approach of reason, religion and kindness. Frequent reception of the sacraments of reconciliation and the Holy Eucharist served as the pillars to his methodology and language of faith. These external proofs are what that Catechism of the Catholic Church (156) call “motives of credibility” examples and models of the faith that provide a clear context of how to express our assent of faith to Christ and His Church.

Don Bosco communicated a distinctive language of love based on his desire to save the soul of any child he encountered. What made his approach so unique is that he would literally express this desire openly and lovingly. In the end his language always centered on the desire for every child to have the opportunity to see God.

St. John Bosco, Pray for us!

Frustrated that her students would not respond to her, she naturally wondered what was wrong. She modeled her teaching techniques after some of the... END_OF_DOCUMENT_TOKEN_TO_BE_REPLACED

In his marital masterpiece, Love and Responsibility , St. John Paul II describes the love between persons as a mutual relationship, a particular form... END_OF_DOCUMENT_TOKEN_TO_BE_REPLACED

There is a distinctive drama that perpetually exists between God and man. The nature of this drama involves whether man in good faith engages... END_OF_DOCUMENT_TOKEN_TO_BE_REPLACED