Does Christ matter in a marital blessing? 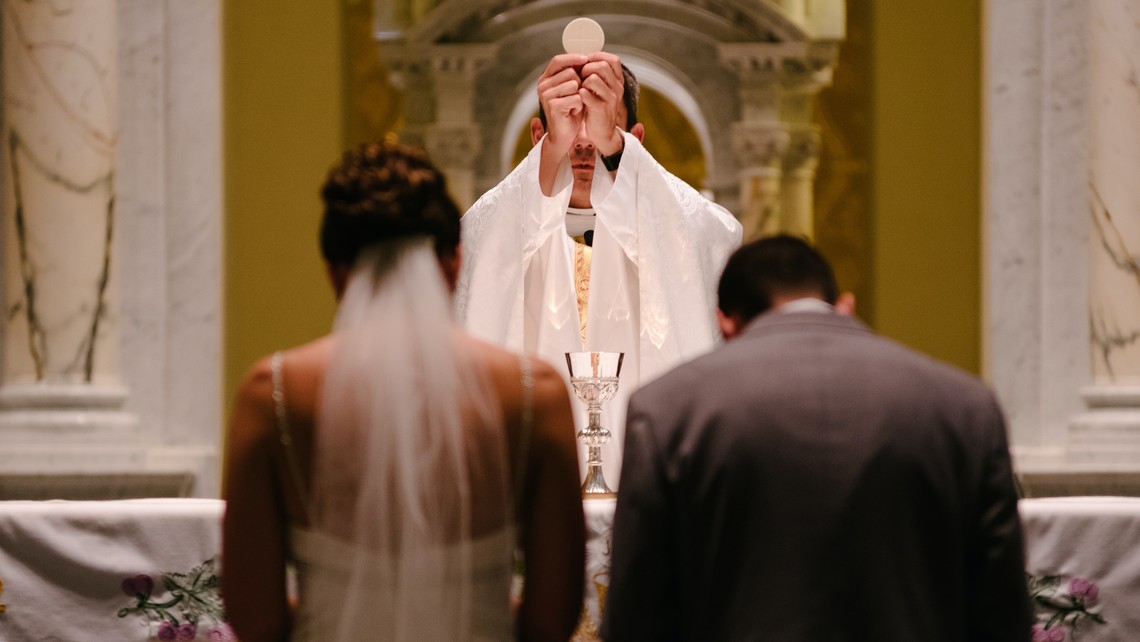 In his sixty-ninth sermon St. Augustine of Hippo describes the deepest desire of the human heart is to see another and be seen by that other’s loving look. The intimate beauty about this particular sermon is the recognition and affirmation of God’s loving creation of man and woman. It articulates the exercise of dignity and respect addressed to God’s children. Though this sermon would appear to offer sound reason and faith that the desire of the human heart is to reflect God not only toward ourselves but our fellow brother and sister in Christ, it also introduces us to an important natural relationship between God and man especially in the exercise of natural marriage.

The great Romano Guardini provides us with further context on the nature of the relationship between man and women and the human heart in his discourse between Christ and the Pharisees on whether it is lawful for man to put away his wife:

Marriage was founded by God. God created man and woman with an eye to their union. Proper marriage forms a unit which come from God himself; its partners are so close, also spiritually, that they are one flesh, and everything that affects the one affects the other. Man can separate only that which he has joined; what God has joined is beyond man’s reach. Man is free to marry according to his own will; that much lies in his power. But once he enters the state of matrimony, he binds himself to God by a bond he no longer controls. That is the divine character of marriage, which can become blissful, invulnerable mystery of strength and peace-also, admittedly, a ponderous fate. [1]

What is the purpose of Marriage?

The response by the Congregation of the Doctrine of the Faith (CDF) whether the Church can bless same-sex unions became quite clear by the second to last paragraph of the Responsum ad dubium that God does not and cannot bless sin.[2] The reason being is that a same-sex relationship is not and can never be considered or identified as a natural marriage. First because it does not involve the intimate indissoluble love between one man and woman who freely consent to one another in love as spouses, and second out of this mutual self-giving of love a same-sex relationship is not open to the transmission of life with respect the nature of the same sex relationship.

The Pontifical Council on the Family explains the natural complementarity of marriage as follows:

Femininity and masculinity are complementary gifts, through which human sexuality is an integrating part of the concrete capacity for love which God has inscribed in man and woman. This capacity for love as self-giving is thus incarnated in the nuptial meaning of the body, which bears the imprint of the person's masculinity and femininity. The human body, with its sex, and its masculinity and femininity, seen in the very mystery of creation, is not only a source of fruitfulness and procreation, as in the whole natural order, but includes right from the beginning the nuptial attribute, that is, the capacity of expressing love: that love precisely in which the man-person becomes a gift and — by means of this gift — fulfils the very meaning of his being and existence. Every form of love will always bear this masculine and feminine character.[3]

The identity of Marriage

St. John Paul II identifies marriage as a continual loving and mutual relationship between man and woman.[4] God Himself is the author of marriage. The vocation of marriage is written in the very nature of man and woman as they came from the hand of the Creator.[5] Since God created him man and woman, their mutual love becomes an image of the absolute unfailing love with which God loves man.[6]

Marriage is intimately identified with God’s love for his children. There is no distinctive separation between God and man because man’s identity originates from God. Christ’s words in the nineteenth chapter of Matthew’s Gospel reveal the identity of marriage that man and woman are no longer two but one.[7]The meaning of the marital act is exclusively inward between man and woman in marriage. The natural goods of marriage establish a unitive communion of beings for the love of one another and the generation of human life. How would society continue to prosper if this was not the case?

What’s in a blessing?

The denial to bless a same-sex relationship couple has been met with some unfortunate dissension among members of the Church’s Hierarchy who strongly prefer to recognize a same-sex relationship by virtue of a blessing of a civil union either through written opinions in effect rejecting the Church’s position on marriage between one man and one woman; or a deafening silence from others within the Hierarchy who have said nothing in support of the Congregation of the Doctrine of the Faith’s dubium which comes from the Holy Father himself.

The nature of a blessing or a conferral comes from God himself who expresses genuine favor upon a person or an object.  A blessing is intimately tied to God and his joy toward someone for example the blessing of Abraham, Isaac or Jacob, or Christ blessing the sacred eucharistic meal at the Last Supper. A blessing is sacred and owes its identity to the Holy Trinity. When a blessing is conferred as in the case of the use of the sign of the cross it invokes the name of the Father and of the Son and of the Holy Spirit. The general result of a blessing is the gift of consecration or sanctification in the name of God the Father who ordered and made all things for good and not evil. The Catechism of the Catholic Church explains that a blessing expresses the basic movement of Christian prayer: it is an encounter between God and man. In blessing, God’s gift and man’s acceptance of it are united in dialogue with each other. The prayer of blessing is man’s response to God’s gifts: because God blesses, the human heart can in return bless the One who is the source of every blessing.[8]

If God is the source of every blessing, then it makes sense to invoke God the Father upon the blessing of a matrimonial union between one man and one woman as ordered and created by God out of love. Hence, God cannot bless sin with respect to a same-sex union because it simply does represent God’s established matrimonial covenant between one man and one woman. A blessing calls upon the descent of the Holy Spirit to confirm the act itself which then is directed toward and ascend to Christ. The Trinitarian and Christological identity of the sacrament of Holy Matrimony is without question because this sacred union was created by God and consecrated by Christ.

In the Rite of Marriage, the following nuptial blessing is provided that collaborates the love of the Father between man and woman, is consecrated by Christ and confirmed by the Holy Spirit:

Let us pray to the Lord for N. and N... that they may always be united in love for each other...Father, stretch out your hand, and bless N. and N. Lord, grant that as they begin to live this sacrament that may share with each other the gifts of your love and become one in heart and mind as witnesses to your presence in their marriage.  Help them to create a home together... Give your blessings to N., you daughter, so that she may be a good wife (and mother), caring for the home, faithful in love for her husband, generous and kind.  Give your blessings to N., your son, so that he may be a faithful husband (and a good father)...

[2] Responsum ad dubium, with regard to the blessing of same sex unions, Congregation for the Doctrine of the Faith

[3] The Truth and Meaning of Human Sexuality, Pontifical Council on the Family, art. 10

There is an interesting yet profound requirement the people of Israel are told to follow written in the book of Deuteronomy. The last book... END_OF_DOCUMENT_TOKEN_TO_BE_REPLACED

The evangelist St. John the Baptist introduces us to the drama that affects every human being when he reminds both Jews and Gentiles to... END_OF_DOCUMENT_TOKEN_TO_BE_REPLACED

A consistent question I have been asked over the course of my ministry is how important is the use of one’s personal experience in... END_OF_DOCUMENT_TOKEN_TO_BE_REPLACED